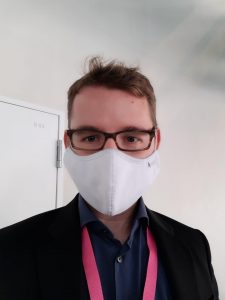 Felix Hübner attended the Kommunikationskongress for the first time in 2020 - under more challenging, hybrid conditions.

Even though the decision was right at the time, my disappointment was great: after the contact restrictions went into effect in March, I didn't think I would be able to attend another event in person this year.

But I was proven wrong: The Kommunikationskongress 2020 took place as one of the first events of this magnitude since the beginning of the Corona crisis - in a cross-media version with digital content and a face-to-face event in Berlin. For this reason, BdKom-President Regine Kreitz also referred to the #kkongress as the "Salzburg Festival of Communication," which also defied the Corona crisis as an in-person event.

Together with around 300 other participants on site and thousands of colleagues in front of their screens, I didn’t experience musical highlights, but instead reflective, informative and brilliant days with many leaders from the communications world - and it was shown quite clearly: Communication has never been as vital as it is today! I have therefore summarized my key findings from the numerous discussions, workshops, keynote speeches and best cases:

A clear stance not only helps companies to position themselves publicly. But above all, it helps them to sharpen their own core corporate brand. That in itself is nothing new. A few years ago, it might have been enough to simply describe how sustainable, future-oriented and conscientious one's own company acts on its homepage. Today, however, it becomes clear that companies and their representatives must actually act upon their communicated values at all times, provide proof and also back them up with facts and figures. Otherwise, the trust of all important stakeholders is quickly lost.

Our world is becoming increasingly complex. Especially due to globalization, social occurrences like the Corona pandemic are hard for anyone to understand in full detail. (Most) people crave explanations from experts. It's no surprise that virologist Christian Drosten has had such a success with his podcast, because that's exactly what he is doing.

Particularly in internal communications , it has become more important than ever before that we as communicators take our colleagues and employees by the hand, provide important information and, above all, explain the context - be it on current Corona safety measures, the formulated mission statement or the new tool for internal employees. Not just once, but as often as necessary. In fact, every new day. Because if there's one thing that will stick with us even more after Corona, it's change.

Especially in the digital age, empathy and mindfulness are becoming increasingly important when managing employees. This was made particularly clear by Microsoft-CEO Sabine Bendiek in her digital keynote. "Technology is only a sub-factor in digital transformation. Without the people behind it, the digital turbo will struggle," she predicted. And she is right. For us communicators this means: Digital tools and digital formats are nice. But we also have to create spaces for personal and human exchange. This is the only way we can all succeed together in meeting the digital challenges and not lose anyone on the way.

4. "#Darwinism: Only those who adapt will survive."

"What was new this morning is already obsolete by this afternoon". It may not be that extreme in communications yet. But we're close: us communications professionals in particular operate in an environment where unexpected things are waiting for us constantly. The Corona crisis has made this painfully clear in some cases. That's why we need one thing the most: courage. The courage to constantly question principles that seem to be set in stone, to adapt them again and again, and to optimize them constantly. And we have to do so in front of ourselves, our employees and our superiors. It takes courage but as the saying goes: the world belongs to the brave.